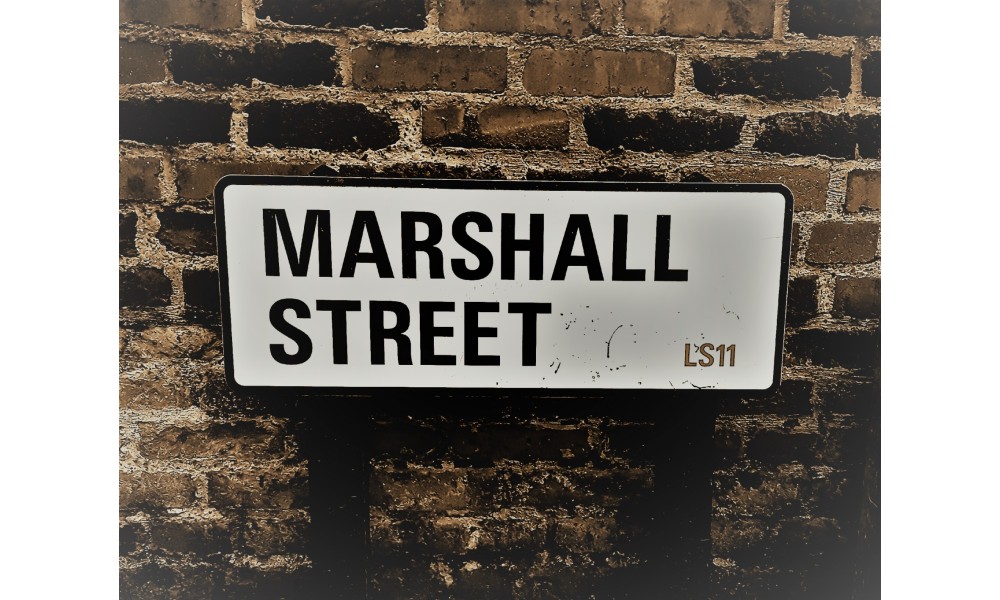 This is the fabric of Holbeck in 2019, the ‘real’ Holbeck; a faintly visible skeleton of a neighbourhood that still carries a spirit of perseverance and still cares about where it came from. That might not seem obvious from the outside, but walking these streets is a lesson in candid realism, mixed with an acceptance that you need to peel away the layers of built-up defiance to find the real human stories that still prevail.

Holbeck is one of the most deprived areas in the country and certainly in Leeds. According to figures released a year ago by the ‘End Child Poverty Coalition’ there are 2200 children living in poverty in Beeston and Holbeck, with 38.3% of children living in low income families.

It’s easy to dismiss these statistics as an emblem of Tory austerity and accept them as ‘just how life is’ in pre-Brexit Britain. It’s not our job to fix it or to prepare people for an apocalypse, and apart from a human duty of care to our fellow citizens of Leeds, why should we care? Taking an insular view of places like Holbeck is easy when we all have our own problems, but organisations big and small have grouped together to enact change. And change is happening, because change is important and Holbeck is important.

The twisted irony is that today’s Holbeck is a victim of the city it created. In 1792 when John Marshall built his first flax mill on Water Lane, Holbeck had a population of 6,000 people. Leeds was a town with a population of only 30,000. Holbeck and the surrounding villages were peppered with individual hand-loom weavers, a cottage industry that wanted to and needed work.

John Marshall set up his first mill in Holbeck because he could utilise the Aire Navigation and the recently-opened section of the Leeds Liverpool Canal. He was also yards from the Hol Beck, from which he could draw a power source to feed his industry. But also on his doorstep was a willing and available workforce, and a growing population that would become consumed and defined by the irresistible and revolutionary wide scale industrialisation of textiles.

At its height, Marshall’s empire employed nearly 3,000 people and produced 425,000 bundles of yarn a year. Across the city, with mills in Armley, Burley and his first at Bean Ings, Benjamin Gott was making similar strides in the woollen industry. Together they achieved a global reach and established Leeds on the map as a centre of trade, industry and affluence. Marshall’s business lasted less than 100 years, but it helped build a city, in body and in name. The business closed in 1886, and seven years later Leeds was awarded city status.

That status brought a rail network and a central rail station, and eventually a road and motorway network. It brought prosperity and opportunity, but gradually those tokens of progress, those conduits to finance and the delivery of people and goods, became a noose around Holbeck’s neck.

But when you have such a rich and significant history it is much more than just a lifebelt to cling to, it is the foundation of a city and a legacy to be proud of, and something that we should fight to preserve and use as a means to educate, enrich and inspire. There is no shortage of that in Holbeck, with organisations such as the Holbeck Neighbourhood Plan, Holbeck in Bloom, Holbeck Elderly Aid, St Matthews Community Centre and Slung Low driving energy and initiatives to deliver self-motivated self-help, which is wholesome and so easy to support. This powerful combination of positive resources ensures that Holbeck doesn’t sit idle and passive, waiting to be rescued. But a generation of fractured plans has seen a cloak of cynicism develop amongst the local community, and understandably so.

The beauty of history is that it doesn’t go away. Sometimes you might want it to, but with Holbeck there is a legacy of spirit, achievement and endurance.

Whilst the Marshall family spread their realm south of Water Lane, building the towering mills that still remain on Marshall Street, and ending with the audacious grandeur of Temple Works, John Marshall’s early partnership with Matthew Murray – an aspiring young engineer who migrated to Leeds from Stockton-on Tees – yielded another gift from Holbeck to the world. 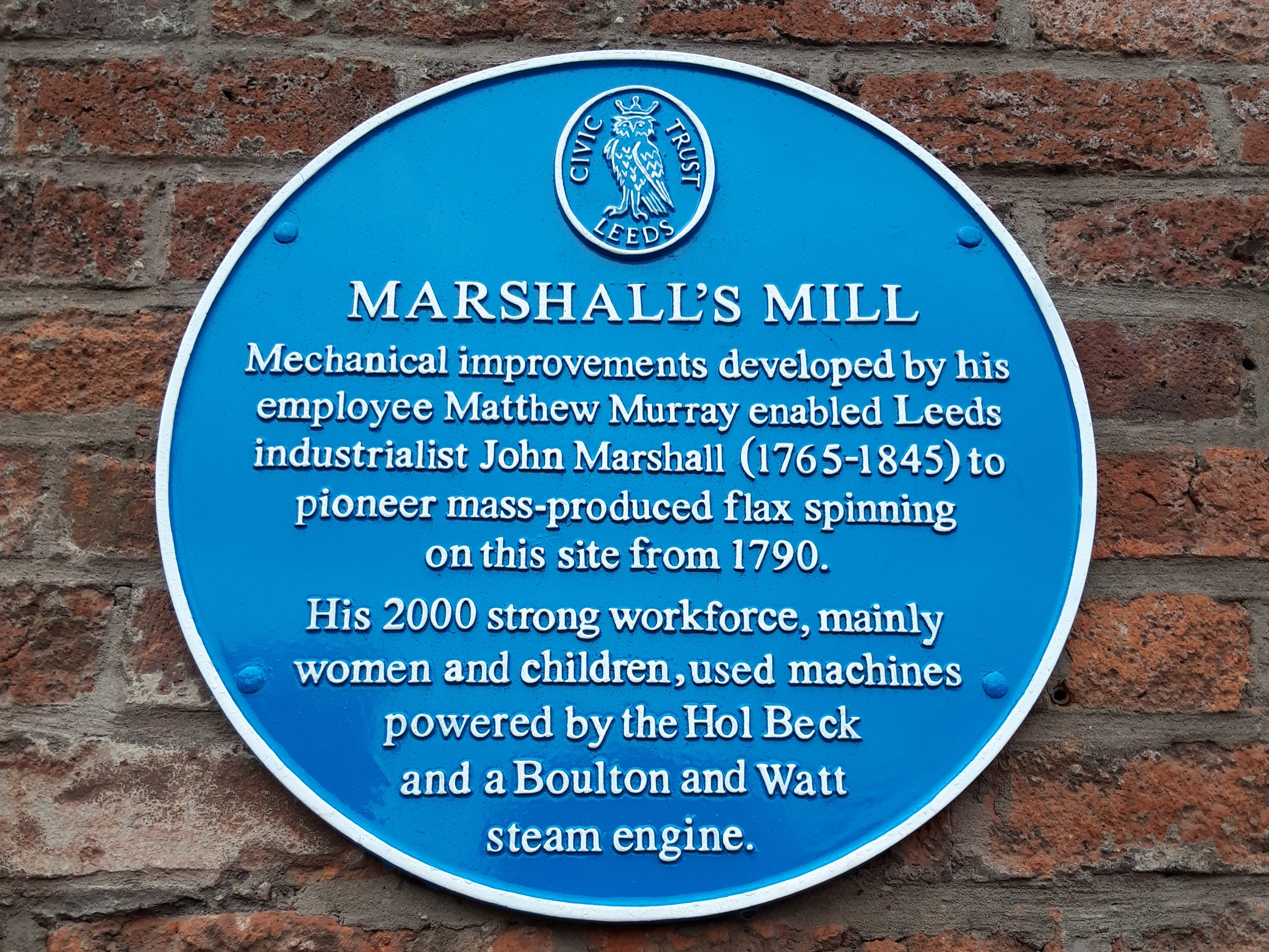 Murray patented spinning machines that allowed Marshall to earn untold riches from the flax industry, and in turn Marshall gifted land adjacent to his mills on Water Lane to Murray in 1797, on which he developed the Round Foundry; an engineering collaboration that bristled with energy and innovation. Murray partnered with James Fenton and David Wood to construct a complex of specialist engineering workshops, and from there Murray developed countless machines for Marshall’s mills, but also steam engines and, in 1812, the world’s first commercial steam locomotive, installed at the nearby Middleton colliery.

As Marshall’s flax business grew, several other textile mills sprung up in the area, keen to feed off his techniques. Leeds was a textile powerhouse and also added iron forging and printing to its industrial portfolio.

Tower Works was also established on Globe Road, a few yards north of Marshall’s first two mills. Making steel pins and gauges for the textile industry, Thomas Harding’s factory was built in 1864, at a time when the industry was beginning to nosedive, but in the three ornate towers, inspired by Italian architecture, there is another stunning architectural legacy in Holbeck.

Other patches of land and buildings of prominence are liberally sprinkled around the streets that today hide them like a grubby secret. Holbeck Mills has a chiselled stature and prestige criminally undersold by its enduring guise as a carpet warehouse, formerly it was the United Methodist Free Chapel. The ornate, red-bricked old public library on the corner of Marshall Street and Nineveh Road. Yorkshire County Cricket Club played three first class games at Holbeck Recreation Ground in the 1880s before Headingley became their permanent home, and all trace of the ground was erased, bar the myriad of streets and houses that today bear the ‘Recreation’ name. The Holbeck Working Mens’ Club was established in 1877 and is now the oldest such organisation in the UK, and the new home to pioneering community group Slung Low.

Many prominent people helped to establish Holbeck as an area structured on a co-operative ethos and geared towards giving local people a voice and a way forward. These included Labour MP Hugh Gaitskill, Labour councillor Reverend Charles Jenkinson, Liberal councillor Joseph Henry and local landowner Emily Meynell-Ingram. All these people are recognised for their endeavours in local street names; a bequest left there to explore for those who want to.

One of John Marshall’s many gifts to Leeds was a hunger for ambition, and a means for working class people to better themselves, as a supplement to the everyday necessity of employment. Marshall built schools in Holbeck for his employees – the majority of which were women and children – and offered them a basic level of education, long before it became compulsory via the state in 1880. He offered local people the opportunity to work and be educated and trained on their own doorstep, when he had no legal obligation to do so. It set a standard and a precedent that people could achieve something in their lives, and Leeds people have continued to do that.

This will all be explored in more detail in future blog posts, but what Marshall created was a self-sufficient community that benefitted everyone, and questioned the accepted narrative of brutal and squalid working conditions which were the norm for the time. Treating people as human beings and offering them basic welfare, as well as opportunities and inclusivity, was at the root of that, and it will be again.

Making a city embracing and accessible, and regarding people as having equal worth and value is what ‘community benefits’ means. Holbeck is an area of great architectural, historical and industrial value; a map of treasures leading to where the Leeds we know was founded. It has a million stories to tell, but at the heart of it is a spirit of endeavour and community that still remains, and will have its day in the sun again.