History Beneath Our Feet – an update 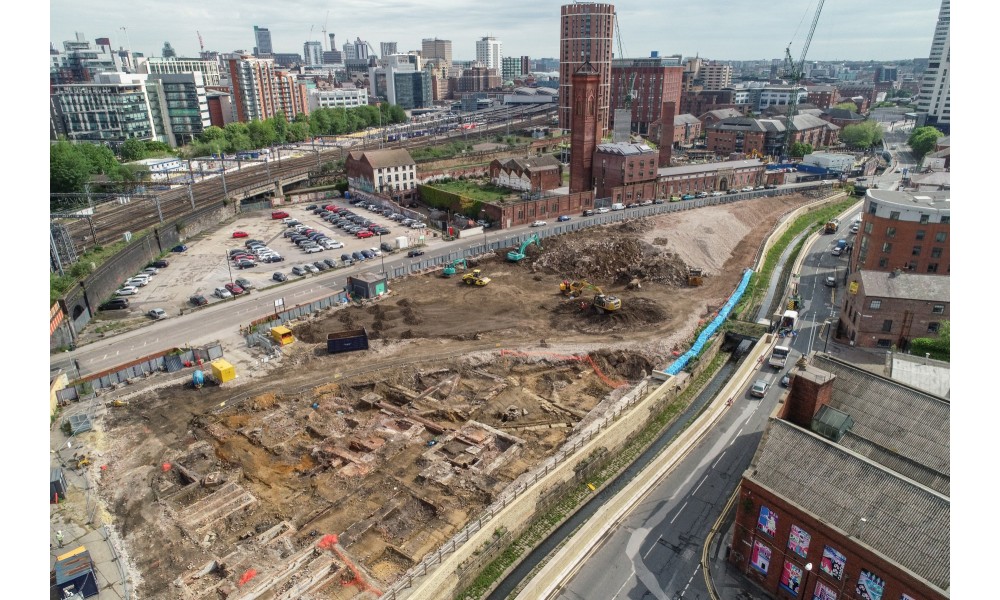 Demolition of the former industrial buildings on the plots now known as Globe Point and Globe Square in February 2019, was the trigger to kick-start CEG’s long-awaited regeneration project at Water Lane and Globe Road in the Holbeck area of Leeds. It also provided the opportunity for some key archaeological studies to be performed on the site which was critical to the forming of the Marshall Empire in the late 18th century and the wide scale development of the Industrial Revolution in Leeds.

At the end of March 2019 I published an article which took an in-depth look at the significance of the site and the detailed preparation work that had gone into the archaeological study. The trial pits dug nearly three years ago had unearthed some interesting findings, but crucially enabled the team to confirm some of the history of the land below the surface in terms of building structures and infrastructure features, particularly where older buildings had been built over the ruins of others.

With the demolition of the former warehouse building on site complete, it was possible for the full archaeological study to take place over March, April and May this year. Acting on behalf of ECUS Ltd and CEG, a core team of five archaeologists from Wessex Archaeology oversaw the removal of modern concrete foundations, overlying tarmac and remaining rubble and ground deposits, before detailed digs could take place.

Marshall’s Mills A and B were a complex site of various ancillary buildings in addition to the main mills, which in themselves were an ambitious scheme to house a number of flax-spinning processes under one roof, particularly for 1791 when Mill A was built, Mill B following in 1795, and re-built a year later following a fire.

The aim of the digs was to establish the nature of the activities and processes that occurred in different parts of the site. This was particularly relevant for the period of Marshall’s occupancy, but much of what remains is also distinguishable as the remnants of the bobbin and shuttle factory that followed Marshall’s occupation, the chemical works after that and then a 20th century post-war automotive garage.

Evidence was found of large, stone-built retaining walls and a series of stone-capped brick drains and culverts. Also, a central feature of a series of three or four rooms connected by a brick vault and a u-shaped passageway, was uncovered, along with a raised sandstone partition with holes and wear patterns, which suggested people once stood there for many hours on end, working at machines.

No ‘surprises’ or unscheduled finds were discovered below the surface and along with the expected artefacts and the confirmation of knowledge in terms of operations in Marshall’s original flax mills, the digs were classed as very successful. In essence, this means that the extensive preparatory work undertaken since 2016 was justified and extremely valuable, and that the next pre-construction phase can now go ahead on the site. Some photos of the digs taking place can be seen below. 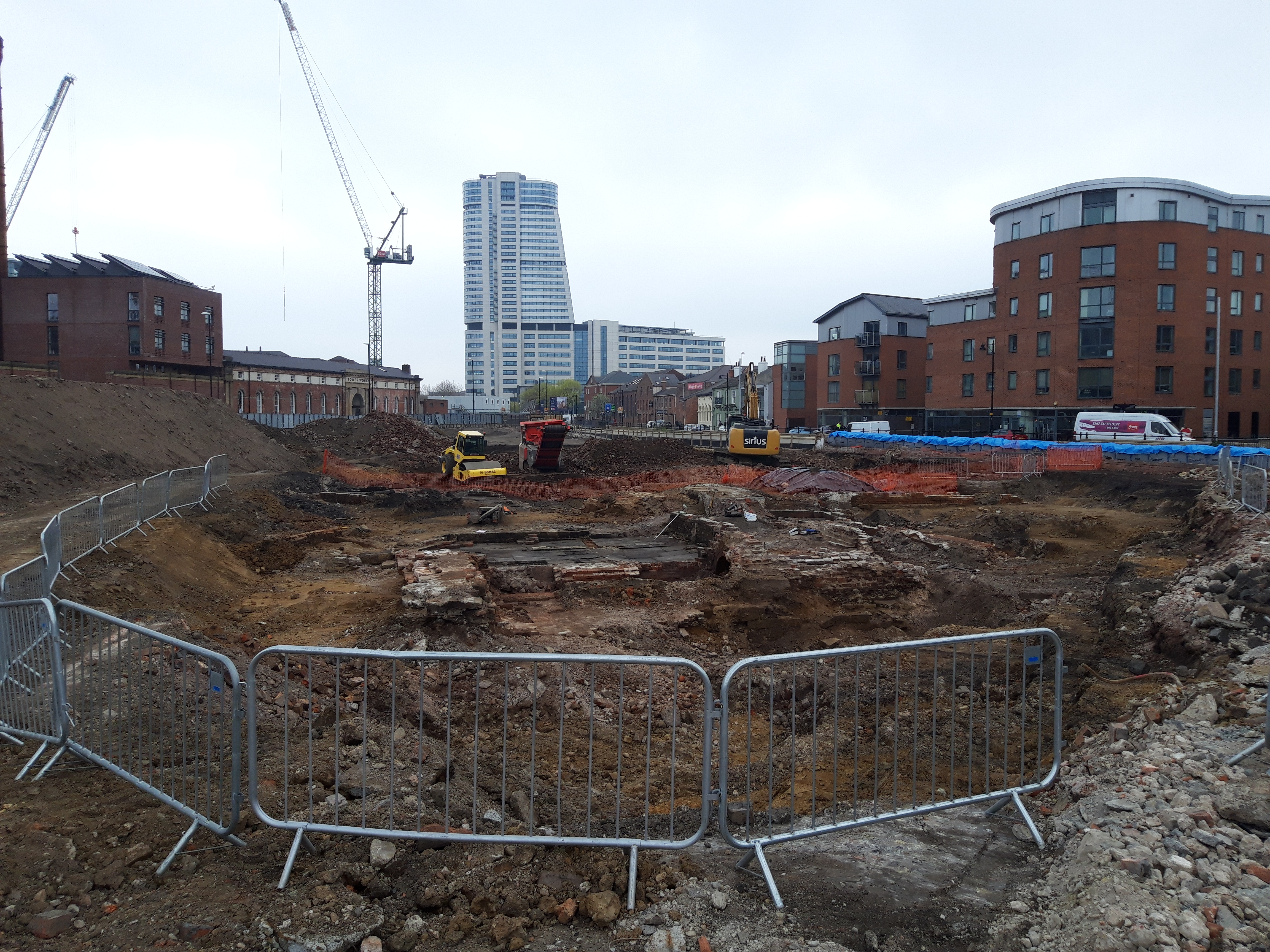 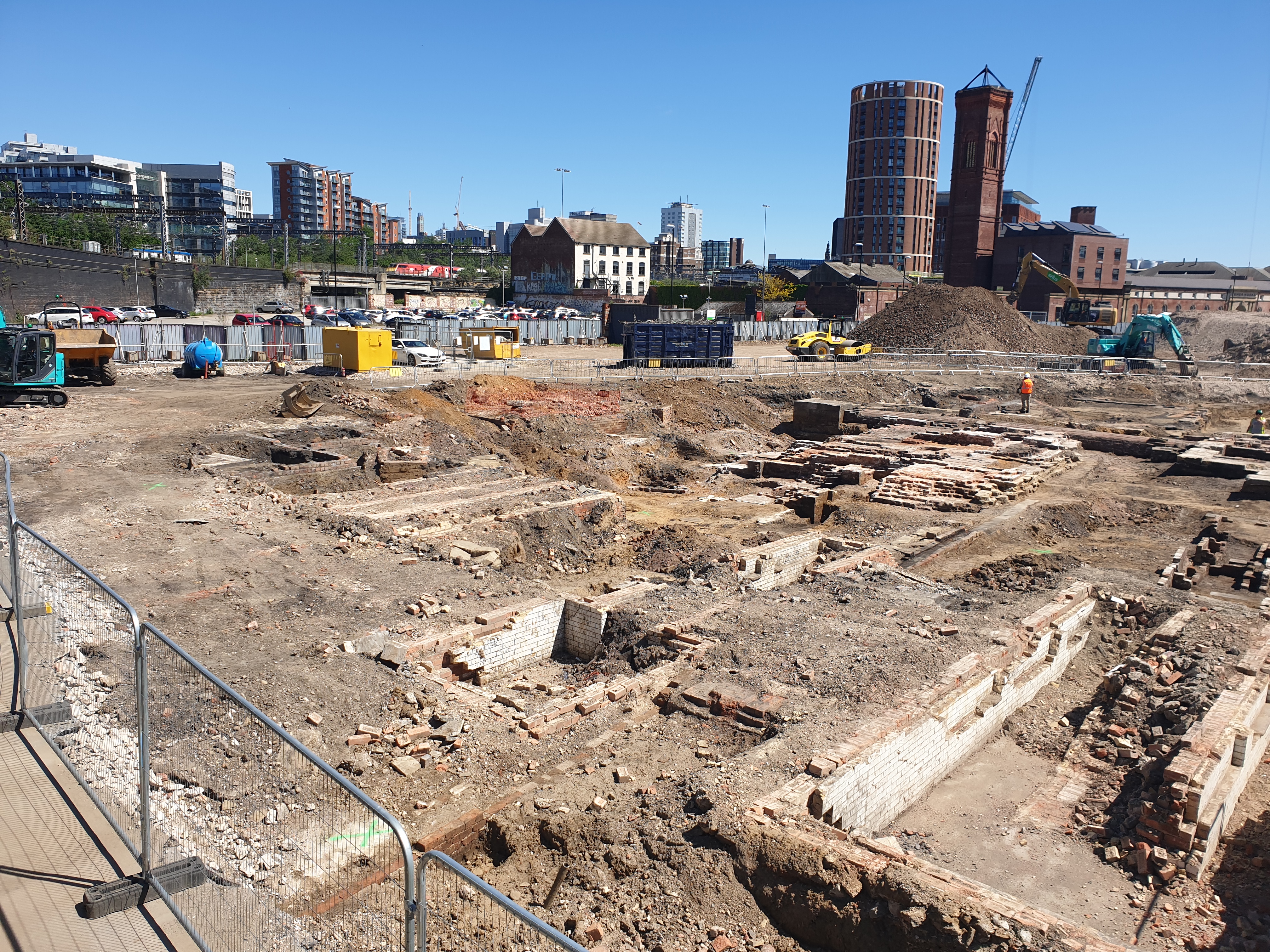 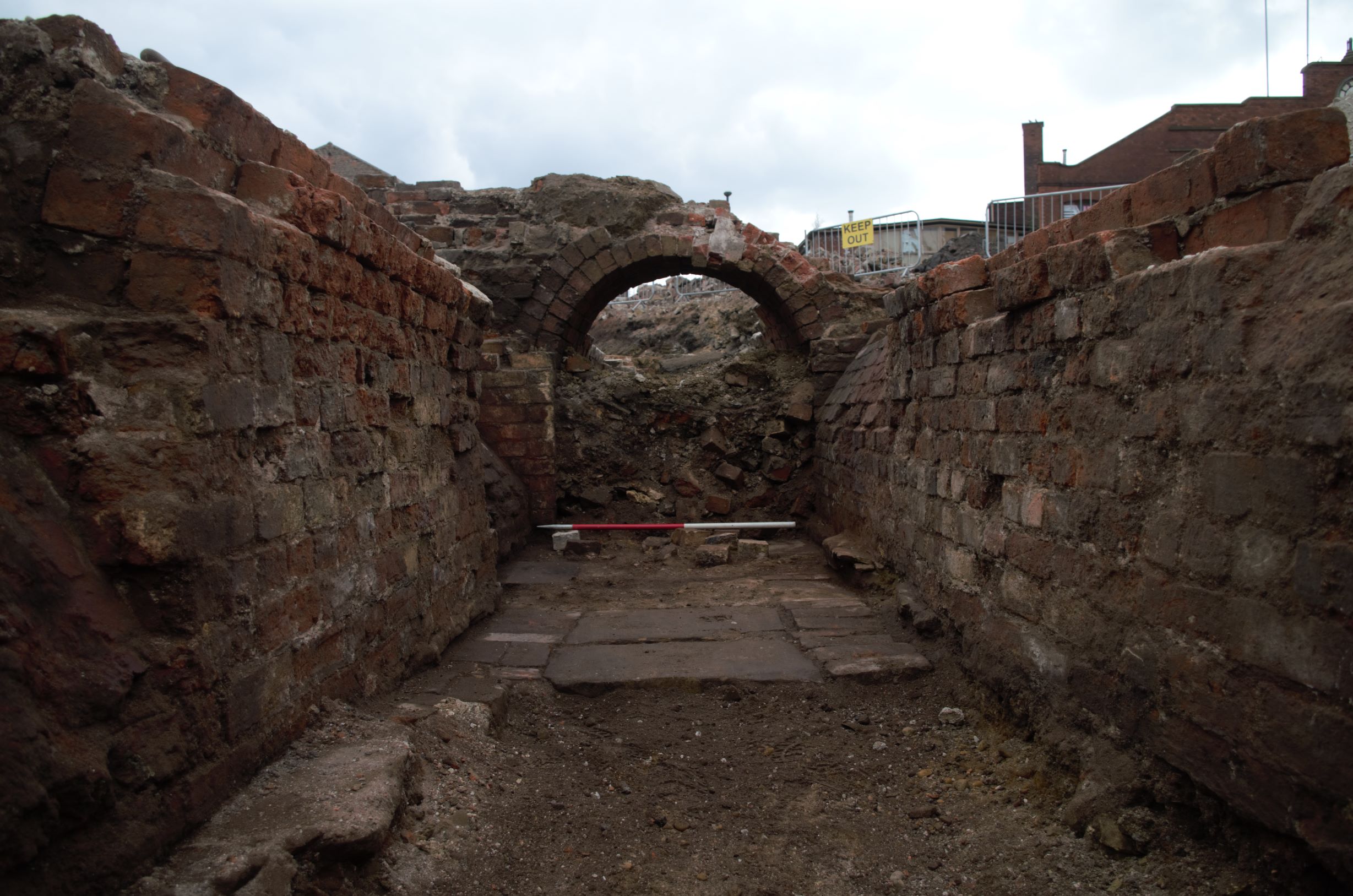 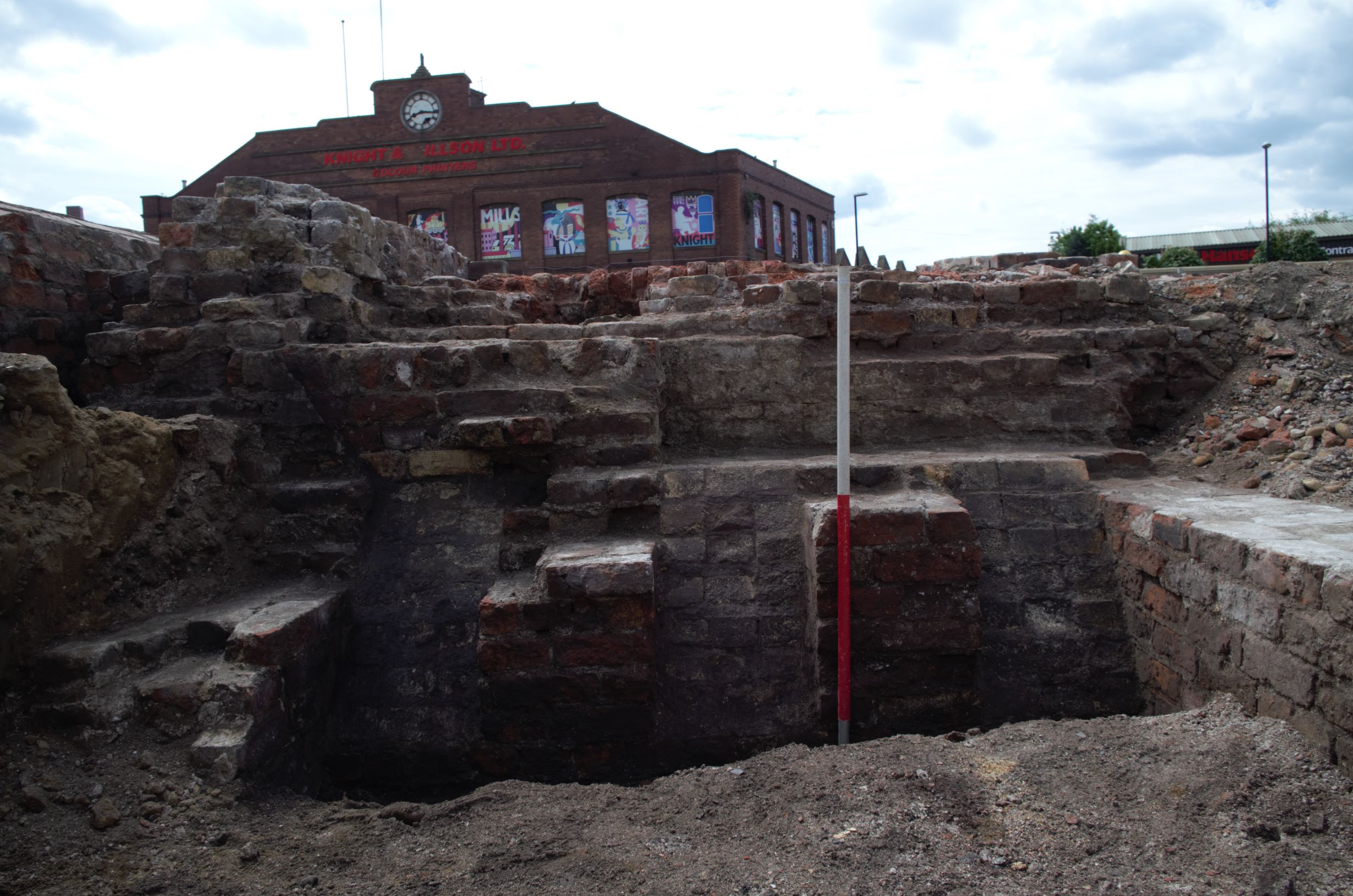 (Photos by Wessex Archaeology and used with permission)

The site is now a huge mound of building rubble, part of which will be used to level out the site, and part of the remainder will be transported to Kirkstall Forge to help level out areas of the other vast site CEG is currently developing. Very little of the building waste won’t be reclaimed in some way, and the historical remnants of the various buildings that have sat on the site will remain in place and be used to create a foundation for the future.

One important reclamation that will help to tell the story of the industrial significance of the site to the Holbeck, South Bank area, and to Leeds as a whole, is currently undertaking some forensic analysis. Underneath the layers of subsequent constructions, a small section of an outdoor courtyard was found, which was confirmed as forming part of Marshall’s Mill A complex of buildings. This amounts to a number of cobble stones which have been dug up and saved. These are now being checked for possible contaminants, but will hopefully form part of public realm for the prestige buildings soon to be constructed. As a permanent reminder of the site’s industrial past, there will be an opportunity for future generations to understand and appreciate the significance of what they are now walking on.

The pre-construction stage involves the selection of the eventual building contractor for the site, while designs are finalised for the development and enabling work continues, with a view to starting construction before the end of 2019. For now, we have this wonderful timelapse video to showcase the work that has so far gone on.

Meanwhile, plenty of other work continues on the site, with the other plots within the CEG development seeing progress of sorts. All this will be detailed in future blog posts when more is known, but some temporary events are planned for the CEG plot of land on the other side of the viaduct.

Even the listed bridge that was used to transport Marshall’s workers across the Hol Beck and to work on the early mills in the late 18th century has a big story to tell, and plenty of work has already gone into ensuring that has been kept in its original shape, and will be restored in accordance with a listed building consent and remain in situ to transport future generations of Holbeckians into the centre of Leeds.

The role of the Marshall family and of Leeds in the industrial revolution is a compelling story. With different strands of this new development paying close attention to detail and ensuring that every element of heritage and significance is retained and remembered, the main objective is ensuring that the story continues.