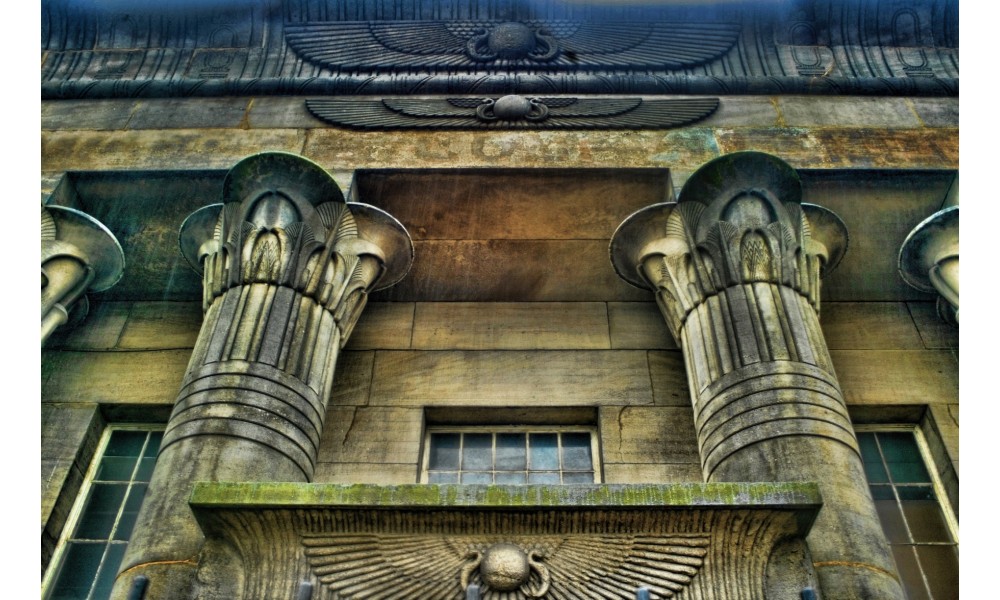 It had put Leeds on the map and helped establish the UK as an industrial powerhouse. Temple Mill was the brainchild of James Marshall, from the second generation of the family, and it was a fabulously grandiose decoration on the flax industry cake.

Architecturally, Temple Mill was bold and confident, almost to the point of arrogance. Amid the blackened, suffocating streets of dirt-stained sweatshops, housing toil and trouble and cheerless long hours, stood an Egyptian palace; an opulent symbol of status and importance in the middle of a choking industrial morass that cared little for such material gestures.

19th century Egyptologist, sculptor and artist Joseph Bonomi claimed that Temple Mill would be “the most respectable piece of Egyptian architecture that can be seen on this side of the Mediterranean”. And it was in Leeds. Dirty, surly, cholera-ridden Leeds. And standing just south of the river and canal system that spewed industrial effluent far and wide.

Quite apart from the regal façade - featuring six capitols, stone engravings and intricate detail on the front portico of the Counting House building that was added two years after the main mill building in 1842 - the overall structure itself is a construction triumph, and a design miracle that in 2019 is defying engineering logic every day that it remains standing.

It is common knowledge that the main mill building was the largest single room in the world when it was first opened, and remained so until Crystal Palace was built for the Great Exhibition 13 years later. While the grand scale of the building matched the Marshall family’s ambitious outlook on life, it was also a business necessity. And the single storey design reflected James Marshall’s innovative industrial ideas regarding productivity, people management, light dispersal and maintaining a stable temperature for yarn production.

Alas, the inherent design carried some key flaws which have only just come to light, while the replacing of the infamous soil and grass roof with a concrete roof in the early 1930s has meant the myriad of cast iron column uprights on the mill floor are currently holding up considerably more weight than they were originally designed to. When the building went into private ownership in 2004 after being vacated by Kay Mail Order Company, it was largely unoccupied, and for the first time in its now 180-year existence it wasn’t in active, daily use, and hence the building has lacked the requisite maintenance for well over a decade.

So today there are serious structural issues with material decay, ongoing movement in the basement, facade movement, water ingress, issues with the foundations and drainage and movement of the cast iron columns, yokes, collars and tie bars. The building also suffered a partial collapse in 2008. 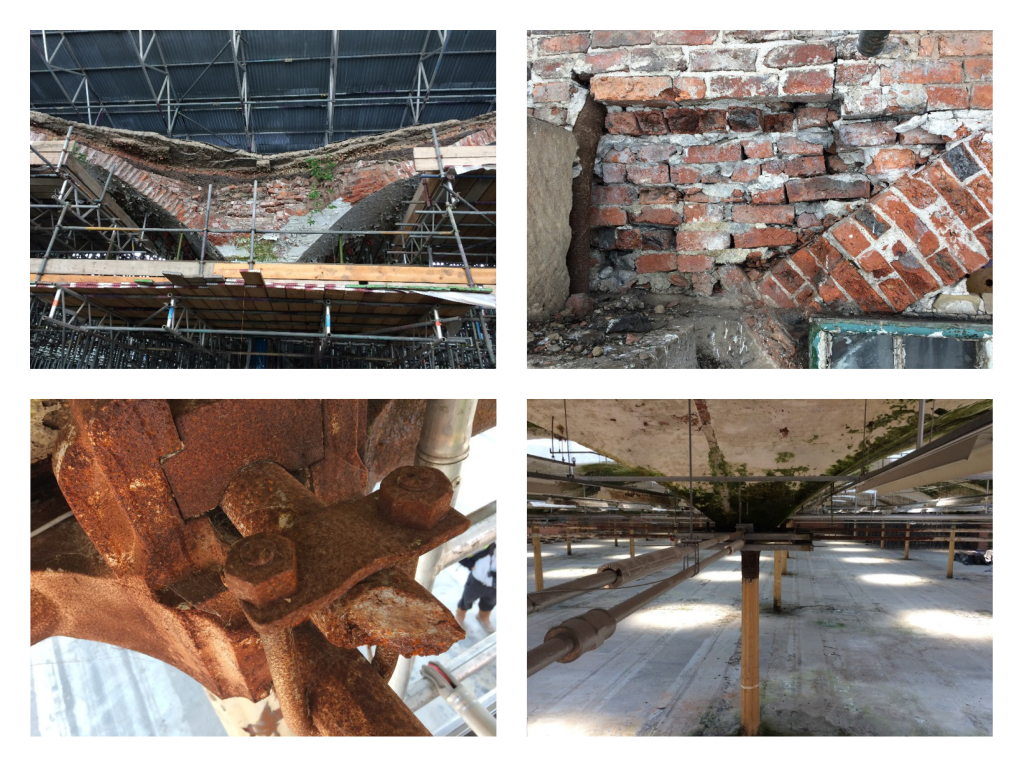 As a result, Temple Works is a ‘high priority’ building for Leeds City Council and Historic England, not just because it has huge importance architecturally, historically and socially, but because it has been on the Heritage At Risk Register since 2009.

For this reason there was huge concern across the city when the building was put up for auction in 2017 with a starting bid of £1, striking a fear that literally anyone could rock up and buy it. And that was probably only mildly diminished when it came to light that development company CEG had stepped in to procure the building the day before the auction. Temple Works is an integral part of the city’s heritage, an important symbol of the industrial revolution in the UK and an architectural gem that still piques the interest and curiosities of a nation with no shortage of historical wonders on its doorstep. And developers change things, and nobody wants Temple Works to change.

Over 12 months later and nothing has changed, except the building itself will continue to deteriorate because of the decades of neglect, whilst CEG is still working hard to find ways to solve the problem, with strictly controlled access restricted to urgent works personnel. Temple Works is no longer palatial, but wearing a hostile cloak of warning signs, inhibitive steel fencing and deep-rooted decay.

Since acquiring ownership in January 2018 CEG have spent upwards of £1 million on countless site surveys, engineering assessments, heritage appraisals, risk assessments, scaffolding, external propping, hazardous waste clearance, electrical isolation and re-wiring, basement zoning and dozens of other miscellaneous remedial works. Now, the building is monitored with engineering sensors, CCTV and drone technology, leading to sophisticated modelling of the building’s structure and potential remedies to its instability. This is all effectively just to stand still and to ensure the building is made safe and remains upright, and that is still a daily challenge. It is estimated that it will cost between £25-35 million to carry out all the required refurbishment works to make the building fully habitable, and that’s before it’s even decided what purpose the building can have.

In terms of time and resources, Temple Works already represents a significant investment for CEG to make, and financially the investment has barely started, and for something with unknown and unquantifiable rewards. And yet a safeguarding concern will still exist within the Leeds public, and particularly with those who have come to see Temple Works as a typically quirky characteristic of a city that refuses to follow accepted practice and do things by the rule book.

It is no secret that Temple Works is one building in the middle of a much wider redevelopment scheme being orchestrated by CEG and promoted by council policy, one which will change the character of the South Bank area around Holbeck, with the objective of making the city centre more accessible and the area more inclusive, rewarding and appealing. It will bring housing, jobs, training and much-needed allure to a once glorious community. And the challenge is to make this possible by retaining the quintessential essence and beauty of Temple Works itself, and complementing it with buildings which can work with its design and character, and with public realm to herald the Egyptian columns that pronounce the building’s prestige. 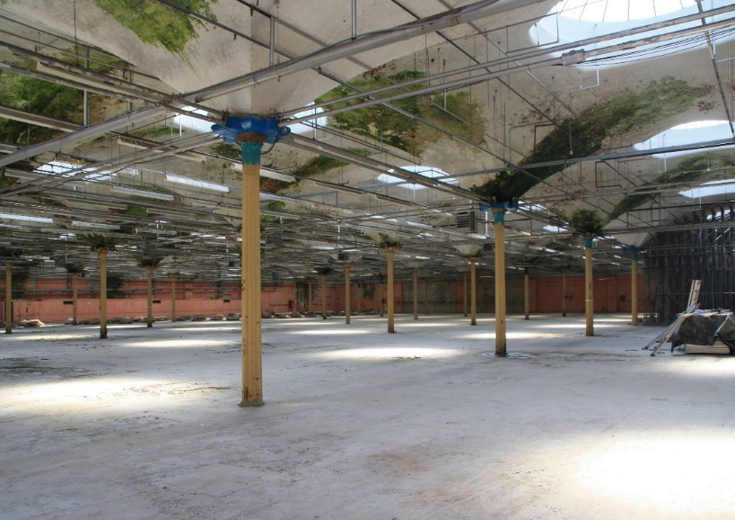 Tentative discussions are taking place on how certain features of Temple Works can be restored and enhanced, but irrespective of that, it is important to understand and appreciate some of the procedural structure already in place to ensure Temple Works is not razed to the ground in a fit of frustration or turned into a day-glo SuperCasino overnight.

First and foremost, the main mill building of Temple Works is Grade l listed, and is the only such building in Holbeck. The adjacent Counting House/Office building is separately listed as Grade ll*. Listed building status offers protection from unauthorised demolition and unsympathetic change, and undertaking such change without necessary consents can result in prosecution. Temple Works has been listed since 1951, as it is of “special architectural or historic interest and is therefore of heritage significance”. Grade l buildings are deemed to have “exceptional interest”, while Grade ll* buildings are those with “more than special interest”. To offer some context, there are currently over 500,000 listed buildings in the UK, only 2.5% of which (12,500) are Grade l and 5.8% of which (29,000) are Grade ll*. The main mill building of Temple Works is one of only 46 Grade l listed buildings in Leeds.

Also, the Temple Works site is within the Holbeck Conservation Area. This was adopted by Leeds City Council in 2009 and is not designated to stop change, but seeks to manage change and ensure it preserves or enhances the ‘special character’ or appearance of an area. Hence, nobody can demolish a building within a Conservation Area without planning permission. New buildings, extensions and alterations are controlled and even minor developments may require planning permission in a Conservation Area, where normally the development would be permitted without the need to apply.

Furthermore, Temple Works appears on the Heritage At Risk Register, a programme run by Historic England to identify and manage sites in the country most at risk of being lost as a result of neglect, decay or inappropriate development. Temple Works has been identified as a heritage asset and its status on the Heritage At Risk Register encourages people to become actively involved in looking after something that is precious to where they live, work and play.

Historic England have worked with CEG to establish a forensic understanding of the fabric of the building and the immediate issues that raises. The output of this painstaking research is a clear appreciation of the task at hand, but also information with which to prioritise attention in terms of risk management and the allocation of funding. 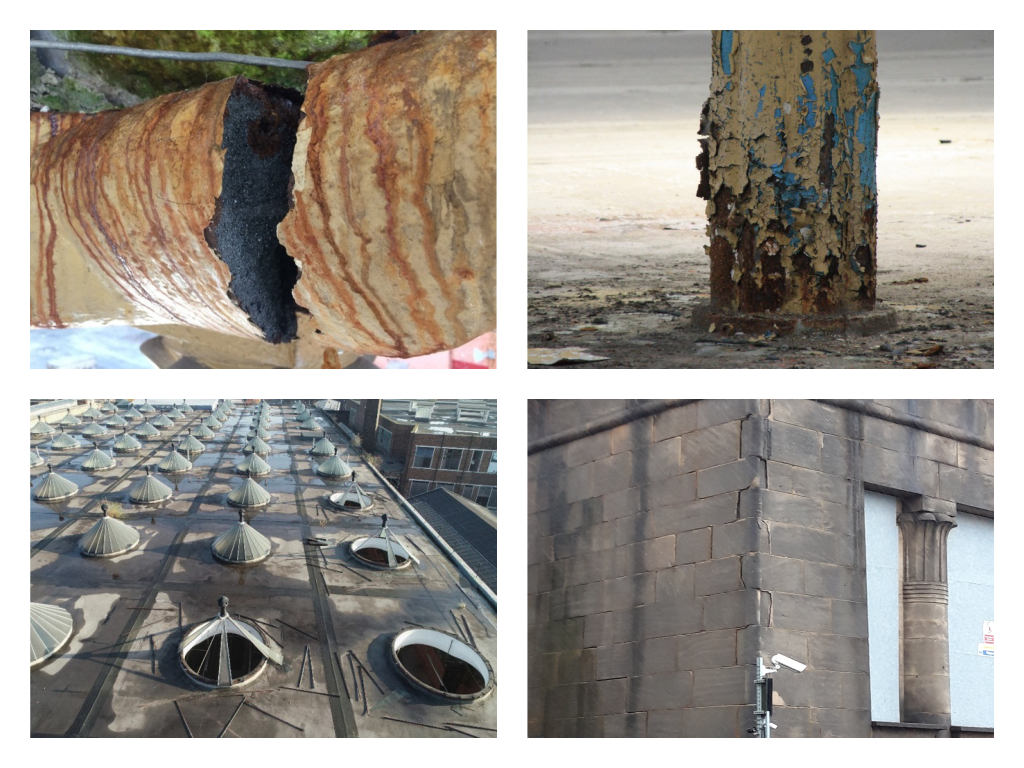 All this work is ongoing and has been for over a year, and an ‘open invitation’ event will be held in Holbeck on 20th March to offer information about the work to date to the Leeds public.

Some of the country’s leading architects, heritage experts and design and structural engineers are working on this project and representatives from each supporting organisation will be available at the event, to explain to the public and to local councillors, MPs, the Leeds Civic Trust, education bodies and key local organisations exactly what has happened in the last year and where CEG’s money has been spent.

CEG wish to reassure people that Temple Works is in good hands. There is a huge wealth of influential people involved in the project, who have vision and who care deeply about the building, and in an instant that should offer comfort, optimism and a flicker of excitement that the building’s potential could be realised.

It is clear that many people are watching developments with a keen interest, and rightly so. Temple Works is a great heritage asset and with it comes a huge responsibility. There are enormous challenges involved in taking this great building on, perhaps the biggest of which is being faced right now. This is a critical juncture in the history of Temple Works, where its condition is dire and its very existence is at stake, and in that sense, and knowing the amounts of money and resources that are going into the hugely complex obstacles being faced, perhaps if we don’t reach a Utopian solution it should not be deemed a failure?

Certainly, every step of the journey will be undertaken with consultation and information-sharing, and with the city of Leeds collectively being able to set the criteria of success alongside Historic England, as the body charged with the role of championing how heritage affects place.

One thing that needs to be understood is that the people of Leeds and the country’s foremost technical experts and heritage organisations are combining to help save and re-use Temple Works. That is a formidable force of support, and so the future of the building should be considered from hereon in, not as a conflict or a concern, but as an opportunity. And maybe the cost of living, the cost of simply keeping Temple Works standing, breathing and proud, is not something to be scrutinised, appalled by or cynical about, but is part of something that could bring benefits to the city that you can’t put a value on?